A big accomplishment (for me) 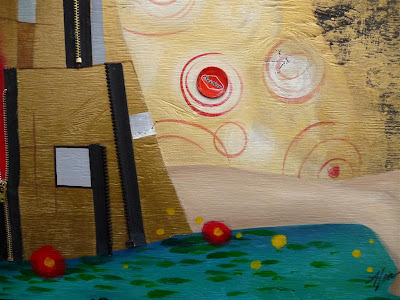 For the past few years I've heard about this Love Show that Launch Pad puts on. Last year I actually went and was blown away by all the incredible interpretations of love by both established and emerging local artists. My friend Kelly Akin was in the show which was my main motivation for going to see it. It became a fantasy of mine to be in it too! I set a goal this year to do just that and yesterday I dropped off my painting at Gallery Homeland!

It's hard to describe the range of emotions one goes through when setting out create a piece of art for a specific purpose/event. For me, it starts with the idea which is very exciting at first! But then comes the task of making it happen and figuring out how on earth I will possibly be able to bring it to life. The work of actually making it always takes much longer than I ever anticipate and I end up pulling ridiculously late nighters and painting until the wee hours of the morning to make the deadline -which really hurts when I have to get up early to take the boy to school or a birthday party the next morning! I haven't done much painting like this since I was in school, in fact this is the first time I have attempted to draw the human form in 13 years -and it did NOT come back to me easily! It felt good to be passionately consumed in my art again, even though I was deliriously exhausted, even though I might have neglected my housekeeping and family a little (OK, a lot!).

I have come to realize that you cannot live a balanced life when art is involved. It's a crock, or at least it's not the kind of art I want to make. Things get thrown wildly out of balance in order to focus on what is important at the moment. What is key is having a support system that respects understands this. Of course, they are always important, but I am more than just a wife and a mother. . . I am also an artist. I know it sucks for them and it's hard to put up with, but I'll clean up when I'm done.

I made my painting and though I felt like I could have kept working on it, I dropped it off within an hour of the submission deadline. I labored over this baby like it was my 2nd child and now I am sending it off to camp: LOVE Camp! My stomach was full of butterflies as I loaded it up into the car (it's BIG). On my way to the gallery I saw a friend on her bike and I actually pulled over and flagged her down to show off the precious cargo I had in my trunk! I'm such a giddy geek! When I got to the gallery I saw C. Haberman, one of the curators of the show. Though we are not close friends, I called out to him and proclaimed "Look! I made something!!" I'm not sure why, but my knees were shaking. This first big show feels more like a prom than anything. I'm so thrilled to have followed through with a goal of mine and to be included in the company of so many artists I adore! I feel like I am 'coming out' and I want everyone to see that: Look, I can do it too! 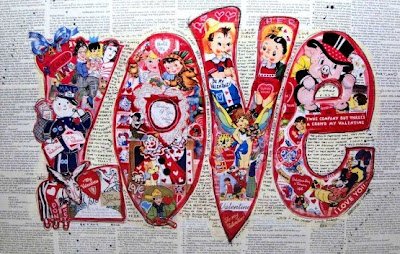