Send in The Clowns 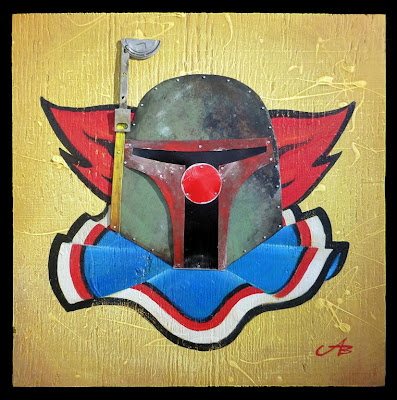 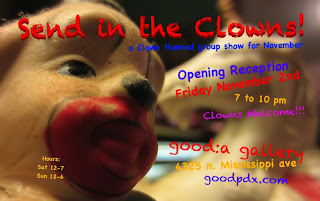 My son wears a Boba Fett watch and has never heard of Bozo the clown.
What does the Bounty Hunter from Star Wars have to do with Bozo the clown? Absolutely nothing
- except in my own twisted mind.

Do you remember Bozo?
-or am I just living in the past man! 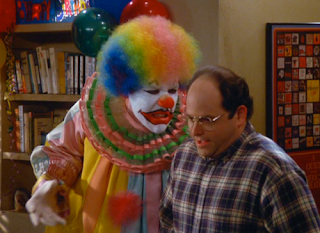 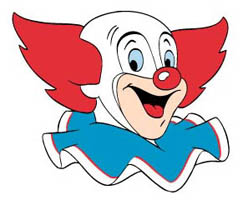 Email ThisBlogThis!Share to TwitterShare to FacebookShare to Pinterest
Labels: Boba Fett, Bozo, Bozo the clown, Good: a Gallery, Send in the clowns 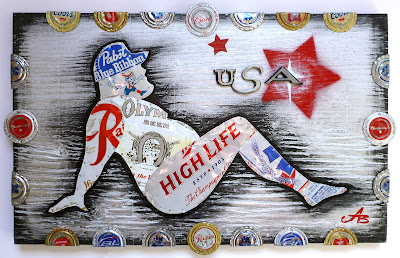 I enjoy art the most when it cracks me up the whole time I'm making it. I don't even care if no one else gets it. It's my own joke and that's good enough for me. I was invited back to the Goodfoot for their next show: I am, therefore I think: a Social Commentary Show. I think I was supposed to make 3 to 5 paintings for this one, but sheesh, they're lucky they got this one outta me. At first, I took the matter very seriously and thought about all the worthy causes that deserve an impassioned artistic response, but that started to feel too forced and with all the drama and stress surrounding the impending election, I decided to lighten things up a bit!

I've been on this bottle cap and beer can kick lately and the image of this mudflap guy popped into my head and I knew I had to do it. None of my fancy micro-brew caps would be appropriate for this piece, this time I needed good ole fashioned 'crap-beer' caps and I was surprised how hard pressed I was to find any in my collection. I get caps from lots of friends (Thank You!) and local pubs, so I was a little surprised when I could only rummage a handful of Bud/Coors/Miller caps from the pile. There's some 'Social Commentary' for you right there.

There's a couple that lives a few doors down from us who work at the bars on the corner, each at one. They are young and hip -in that Portlandia sort of way and wear large plastic rimmed glasses -so we call them The Buggles (my boy actually sings this song when they walk by) -which is several times a day to and from work. I've never had an interaction with them before, but the other day, I jumped out the front door to ask them if they could score me some bottle caps. I'm pretty sure I frightened them a little, but a few hours later there was a plastic bag on my front porch full of caps! I tell this story because this is how I work, it is all part of my 'artistic process'. I'm a goofball and I have no shame and I think it's important to know that the caps used in the piece came from the Lutz and the Delta, thanks to a couple of hipsters who have never before given me the time of day. Funny.

So there's also this guy, this grumpy old man who lives in the hood, we call him 'Buy American'. We've lived in our house for 10 years and for TEN YEARS we've put up with him ranting and raving to "buy American" as he walks by our 'foreign' cars on his daily excursions to BiMart. He is clearly in a world of his own, perhaps he even has a condition, but he's not getting any sympathy from us. It was startling at first, to hear someone yelling over the fence to us as he passed by, then it became a joke, now it's just plain verbal abuse and we're not gonna take it anymore! We've even seen him on the Boulevard shouting out to others to "buy American" -this kind of hostile bullying cannot be tolerated, so now we yell back at him "Shut up old man!" and "Buy Peanut-butter!" Yes, it's a beautiful day in this neighborhood.

It's so silly how misguided some people are. Here this guy is harassing us over our Japanese and German cars- which contain parts made right here in the good ole USA, while his beloved 'American' cars are made up of parts made over seas!  Reminds me of the time El Hueso and I stopped into a pub in the Po-dunk foothills of the Sierra and tried to order a beer: "what kind do you have?" we asked, "ALL kinds" the waitress replied, "Bud, Bud Lite, Coors, Coors Lite, Miller, Miller Lite. . ." and then we asked how about St. Stans? (a local microbrewery just down the hill) and she said "Oh Nooo! We don't carry any of that foreign stuff!"  Ha!

This guy is FOR SALE through The Goodfoot Gallery
click this link to buy online:
http://thegoodfoot.com/gallery/exhibit/92/piece/8798/