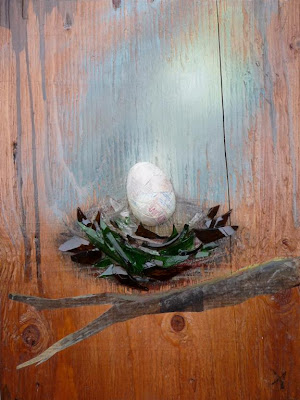 This painting is an illustration of the problem of loving too much! You may not like it and it wasn't meant to be pretty. It was an important exercise for me to figure out how to do it and practice the process of turning what is inside my head into something others can see and hopefully understand. I am still discovering what kind of art I want to make. There is the art that is made to sell . . . and the art that is meant to tell. This piece has a story . . .

Last Summer I signed Nate up for Nature Camp, a week long day camp in Oaks Bottom Wildlife Refuge. It was to be his first camp experience. He has been attending classes through Parks & Rec. at Community Centers since he was a baby, but those had all included parent involvement -so I got to attend too! Now that he is getting older, the rules are changing and I am not allowed to tag along. I understand the value of him having a life without me, but I'm not ready yet to just drop off and let go. Obviously, school is different, it is a familiar community. We know the teachers, we know the kids. It is hard to trust the UNKNOWN.

I think being the parent of only one child intensifies my dependency upon him. I've got all my eggs in one basket and I know it sounds a bit crass, but I have no back-up. At times I can be terribly preoccupied by all that can/could go wrong! I worry obsessively and am struggling to accept the fact that I cannot control the world that Nate lives in. I cannot prevent the other kids from hurting his feelings. I cannot prevent him from falling out of the tree and smashing his head wide open! I cannot prevent the driver from not seeing him in the bike lane and driving over him!! I cannot prevent the creepy stranger from jumping out of the bushes and nabbing him!!! If only I really could create a safety bubble for him, or a force-field of love and kindness. I do my best to give him the tools that he needs to survive, but I cannot protect him from everything . . . and I just HATE that!

As I was stressing the night before sending Nate to camp, I had a vivid nightmare of a nest built of broken glass. I don't usually have dreams that include such cool imagery, so I knew this was something I had to do something with. I had worked myself up into such a tizzy that I almost threw up after dropping him off that morning. I came straight home and started breaking bottles! My artistic passion fizzled when I couldn't figure out how to attach the glass to the board. I had been looking forward to spending the week in my studio, making art while Nate was at camp; falling into deep holes, getting lost in the woods and getting bitten by snakes. I have to admit that it was almost a relief when the Heat Wave hit and I could claim that it was inhumane to make him run around outside all day in 106 degrees! I didn't make any art that week and Nate only got one day of camp, but I think we both preferred to spend the quality time bonding with a waterfall in the Gorge instead.
Posted by Alea Bone at 9:51 AM