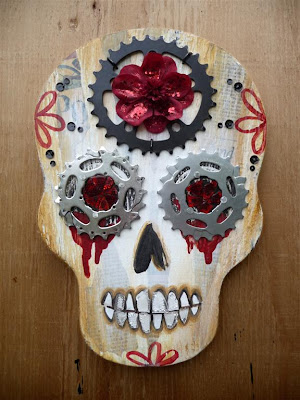 I have titled this Calavera: 'Share the Road'. It is a tribute to all the cyclists who have been killed riding their bikes in the city. I created this piece specifically for the 'Muertos' show at Redux and it can still be seen there until Nov. 30th. It started with picking up bits of broken reflector in the street and feeling that each broken shard had a story to tell. I took the opportunity of being involved in this show to create something that I hoped would convey a message, it was a bit of a departure for me. I tried to keep it pretty -in the 'sugar skull' tradition, but I also let it bleed. For the most part, I enjoy art because it makes me feel good, but sometimes I get even more out of it when it makes me angry. I felt it was important to make something that might stir an emotional reaction and make others angry too. In my own little way, I hope to inspire an awareness: to SEE cyclists on the road, be courteous and drive safe (STOP driving over them!) -it's a matter of life and death!

El Hueso doesn't like this piece. He was instantly put off by the gory aspect. He had been enjoying my quirky little Calaveras until this one crossed the line. It's true that my work has been mostly lighthearted, decorative little musings meant to bring a smile and ease our fear. Let it be known, it is NOT my intention to glorify death or wallow in the dark side. My folks for example don't really get what I am doing, it just doesn't appeal to them at all. I understand that not everyone wants a skull on their wall! I know that death is a loaded subject and the last thing I want to do is offend anyone. But kids on the other hand, are totally drawn to my stuff. They don't have the baggage attached, they just think skulls are cool! Perhaps it's a generational thing. I want to know what you think. Be honest, be forthcoming, I'd love to hear your feedback.
Posted by Alea Bone at 12:27 PM