Duty Now for the Future! 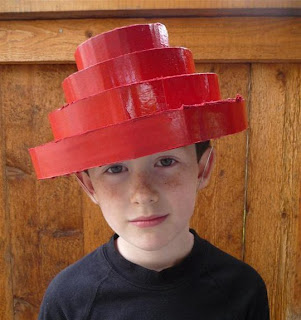 I think it was 1981, I was 15. I was just venturing out into the world, tentatively taking the bus out to Telegraph to stroll the streets, in search of the pieces to the puzzle that would ultimately define myself. I remember one time wandering the campus of UC Berkeley and being struck by some guys shouting out a window. I didn't get what they were saying, but they were hanging a crudely crafted banner outside their 3rd floor window which read DEVO! It was spray painted on a sheet and they were really excited about it and I got excited too even though all I knew about DEVO at the time I had learned from MTV and that was to "Whip it. . . Whip it Good!"

That song was catchy and the video was pretty slick, but beneath the commercial facade, I felt a kinship to a cult that was brewing: a cult of fed-up, misfit, pissed off, anarchist arty rebels who wanted to save the world, who saw things were going to shit and wanted to speak up about it. That impression, that moment, that day, stuck with me. It was my first exposure to how a band could become a movement, how the power of art (music) can make a scene and hopefully make a difference. I was at that impressionable age when the music rang loud and true to my ears, made my head spin and burned a hole in my heart. It hit me where it hurts and defined who I am today. Deep down, I think I'll always identify with that misfit rebel who wants to save the world.

I never got to see DEVO back in the day, though their music remained an underlying current to my adolescence. After growing up and growing away from the in-your-face-fervor of the punkadelic wave, I finally got the opportunity tonight to ride that wave again.  I admit I was afraid of what a difference 30 years would make and that they might be a woeful sham of what they once were. . . but DEVO delivered! They were not nearly as old and fat as I feared they would be, or as I felt I was, or as the audience clearly seemed to be!

Something came over me sometime around when they played 'Going Under' and I was 15 again, full of Passion and Rage! The lyrics came back to me as a mantra from my youth:

The scars of Experimentation suddenly stung with a fresh vengeance and transformed me into a 44 year old gyrating-slam-dancing teenager jerking back and forth! Needless to say, the person I was with was not enthused by my antics and apparently the surrounding fogies didn't appreciate my display either! Who the Hell were all those people anyway?! I don't remember them being around back when I was out-casted for being a New Wave Freak! If they were freaks also, then WHY weren't they dancing with me tonight? How can you listen to DEVO and stand still? Who the Hell do they think they are? Standing Still is Living Still. If that's who they are, then that's what's wrong with the world. The message is still the same (30 years later) Thing's are fucked so Act out, Freak out, get pissed! And don't be afraid to piss other people off . . . at least I lived a little tonight! I never cared before what people thought, so why should I now? All that really matters is how you feel and what you do about it.

"a victim of collision on the open sea
nobody ever said that life was free
sank, swam, go down with the ship
but use your freedom of choice

I'll say it again in the land of the free
use your freedom of choice
YOUR FREEDOM OF CHOICE!"