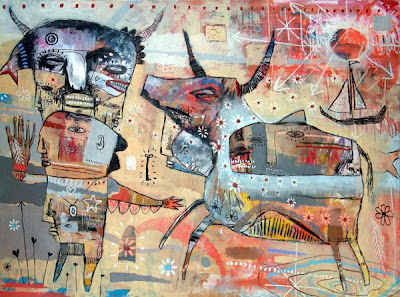 'Invision' by Jesse Reno
Went Downtown today. Don't get down there much anymore. It's a big deal for us to muster up the energy to cross the river, especially when it's so dark, dreary and drizzly out! But we were headed to a Birthday party and I wanted to pop in to the Grand Opening of Crafty Wonderland's Pop-Up Shop! It sure was gray and soggy out, Portland's typical Falling-into-Winter fashion. But downtown was bustling! The streets were full of people walking and shopping. They can't all be loaded, I thought, they can't all be tourists. Who are all these pretty people out in the rain with money to burn?

After perusing the Small Wonders Art Show and partaking in a crafty cupcake, I wandered into Art Media for the first time since Art School. What a blast from the past! Same guy was still working there! He looked at me with a glance that seemed slightly beyond retail protocol. Did he remember me? I used to spend what felt like hours browsing paints, pretty papers and portfolios back in the day. I went to school 2 Park blocks up. My studio was just around the corner. These were my old stomping grounds. It's been 12 years! My mini skirt and suede platform boots retired to the Goodwill many moons ago. I'm a gray-haired, married mama now, in cheap jeans and comfortable shoes. . . on my way to play glow-in-the-dark mini-golf with a few close kid friends. Who could possibly recognize me now!

Big N and n8 were waiting for me by the door. I bought 2 magazines -and without even any argument from Big N! A luxurious splurge indeed, but I think he realized how much it meant to me. I bought the latest issue of Juxtapoz -which has pretty much shaped and defined most of what I appreciate about art for the last 15 years, and a rag called Somerset Studio. No offense, but normally I never would have even reached for the latter -even though I know a lot of my friends read it and really love it! Some of the more textural collage stuff is nice, but most of it is a little too frilly for me, and I don't really go for mass market shabby chic. I realize that mine is an unpopular opinion, especially now when art journaling and soul collage is so HOT! Though some of it is really beautiful, I just don't want to make that kind of art. Therefore I will probably never amount to much -since that is the art people seem to want. Any way, I bought the mag because I had heard that this month's issue had an interview with Jesse Reno! Who would have expected it?! Such a juxtaposition of style (ha ha). In fact, there is a grumbly letter to the editor about the magazine's recent "new direction".

I got to meet Jesse Reno and see him work last month during Open Studios. It was a heart-pumping, jaw-dropping experience that I got to share with a friend. We both walked out of his studio with goosebumps and all we could say was "Woooah" -in that speechless Keanu Reeves sort of way. Jesse represents the grace of living in the Groove. We could feel it the minute we walked from the outside world into his. This is it, I thought. THIS is what I want to be! I want to be one with art: breathe it, dream it, make it, BE it! I want art to support my life and my life to support my art. Watching him paint, listening to him describe his process and tell his painting's stories was an exciting glimpse into a world I so desperately want to be in. And for that moment I was in it (vicariously) . . . until me and my fellow mom-friend walked out the door and back into our world.

Are you living the Life you were meant to live?